OnlineBootyCall.com is a site that really amused us if nothing else, and it’s because this particular site just has a whole lot of hilarious notions about how dating online should work. They have some pretty mixed signals going on; some of it is about getting sex, and other ideas are about getting married. We’re not even sure why this site is trying to push one or the other…it’s not good with either, quite honestly.

One of the more amusing things about this site, however, are the OnlineBootyCall commandments. These ‘suggestions’ are really just laughable, and they talk a lot about how to get laid, or how to have a really fun, casual relationship. Too bad the site is more or less empty and inactive, and that they really are lacking in a number of features to help you meet more women. They need to clean up their act, or it’s just going to get even worse as time goes on. For us, it was already too empty for us to consider this a consistent haunt for you to get the girls that you want.

Our OnlineBootyCall review was lacking.

After spending a solid month on our OnlineBootyCall review, we were really not impressed. The whole of our time spent here was mostly spent looking for women that we actually wanted to sleep with, which was already pretty hard. They don’t have very high numbers on this site, and beggars can’t be choosers. This site was a pain to send out a total of 50 messages on, that’s for sure.

From those 50 messages, we only managed to get a total of 23 responses back. We usually like to see about 50% of a return, so while this wasn’t terrible, it was still below the number that we do like to end up seeing from our top sites.

We only ended up having a total of 2 women want to meet up and date us, and only 1 ended up showing up. She didn’t sleep with us, though, so that pretty much ended our campaign of hoping this site would end up working out. Instead of working out, it just disappointed us, and left us feeling as if we wasted an entire month doing…well, not much of anything. This site is empty, and it doesn’t have girls that are serious on it.

OnlineBootyCall has a real problem in our eyes, and it’s called being really, really boring. It’s just not active enough, and it’s the kind of site that’s only going to end up giving you a headache if you spend too much time looking at it.

Aside from the bad layout, it’s just lacking features. If you’re looking for a powerful search engine to look through profiles, you won’t get it here. Even if you pay, it’s just still the same thing.

Their messaging system does a poor job of keeping out spam, and some of the messages that we got in response were, in fact, just spam mail. That’s not something that we really want to deal with. 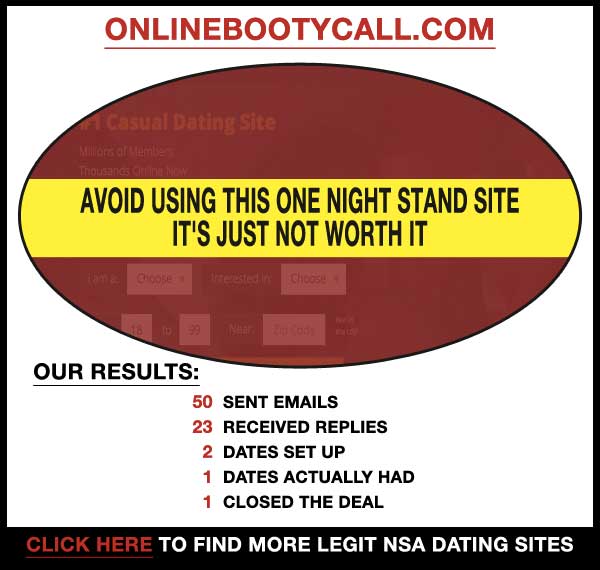 Don’t try OnlineBootyCall. Subscribing on this dating site was a BIG MISTAKE. You should try one of the best dating sites here

With OnlineBootyCall, you won’t get results.

It’s our opinion that OnlineBootyCall.com is just not that great of a site. It’s a site that needs a lot of work, and from our results, we can’t really see it giving you the kind of consistent opportunities to get laid like you’d want.

Instead, you should be checking out our favorite site for adult dating, and that’s FreeHookups.com. With some awesome results like ours in the future, you’ll be able to have a ton of chances to meet ladies.